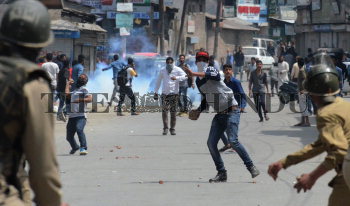 Caption : SRINAGAR, JAMMU AND KASHMIR, 05/05/2015: Kashmiri protestors clash with Police during a protest called by the traders against the alleged indifference of the State Government in rehabilating the flood affected people in Srinagar. Photo: Nissar Ahmad