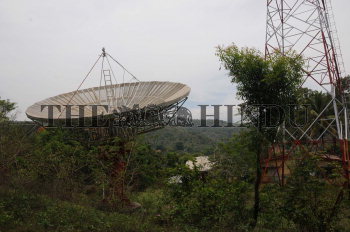 Caption : PALAKKAD, KERALA, 04/04/2015: These receivers and the TOWER represent an era in which Door Darsan's satellite linked telecast was the only source of television entertainment in the country. Cable TVs and private channels were remained unheard of. The satellite linked telecast even covered the backward Attappady region of Palakkad after some people at the Information and Broadcasting Ministry felt the tribal community must not be excluded. A relay station was esablished at Agali in Attappady three decades ago and it still functioning. Tribal homes with old generation televisions with same old antenna are still receiving signals from here. The station makes available both Door Darsan national and regional channels. After all, it it is free to all users. Half a dozen staff are monitoring the Agali relay centre. Photo: K. K. Mustafah