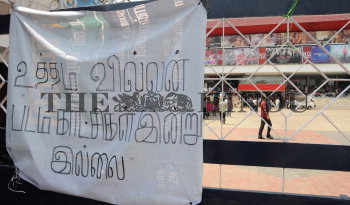 Caption : COIMBATORE, TAMIL NADU, 02/05/2015: Fans were disappointed by the display in a theatre in Coimbatore shortly before Uthama Villain was released May 02, 2015. Photo: S. Siva Saravanan