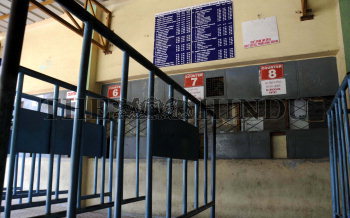 Caption : COIMBATORE, TAMIL NADU, 30/04/2015: Counters at the RTO (Central) in Coimbatore wore a deserted look on April 30, 2015 as the staff took part in the nationwide strike to oppose the Road Transport Safety Bill 2014. Photo: M. Periasamy