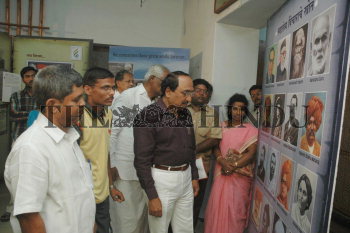 Caption : Madurai:12/01/2008: District Collector S.S.Jawahar having a look at the visuals and documents displayed at the Niradhar Darshan Exhibition commemorating the 100th birth anniversary of BHAGAT SINGH, 150th year of First War of Indian Independence at the Gandhi Museum in Madurai on January 12, 2008. Photo:G_Moorthy.