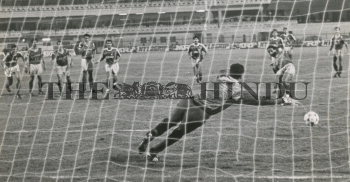 Caption : FAHAD Marzq converting the penalty shot which gave Kuwait the equaliser against Lebanon in the Asian Zone Group 'B' league match of the Pre Olympic Football Tournament at the Lal Bahadur Stadium in Hyderabad on August 12, 1991. (Published in The Hindu on August 13, 1991) PHOTO: THE HINDU ARCHIVES