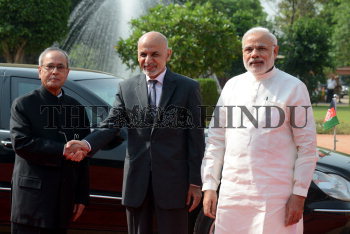 Caption : NEW DELHI, 28/04/2015: Mohammad Ashraf Ghani, President of the Islamic Republic of Afghanistan being welcomed by President Pranab Mukherjee and Prime Minister Narendra Modi during a ceremonial reception at the Forecourts of Rashtrapati Bhawan, in New Delhi on April 28, 2015. Photo: V. Sudershan