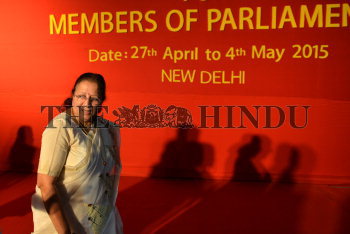 YOGA SESSION FOR THE MEMBERS OF PARLIAMENT.

Caption : NEW DELHI, 27/04/2015: Lok Sabha Speaker Sumitra Mahajan arrives to attend the inaugural day of Yoga Camp at Morarji Desai Yoga Centre in New Delhi on Monday, April 27, 2015. Sripad Naik (not in picture), Minister of AYUSH, the organiser of the camp said, the camp is being organised to make Parliamentarians stress free. The first World Yoga Day which will be celebrated on June 21 this year all over the world. Out of 545 Mp's barely 20 MP's could manage to attend the inaugural session. Photo: Prashant Nakwe Photo: Prashant Nakwe.