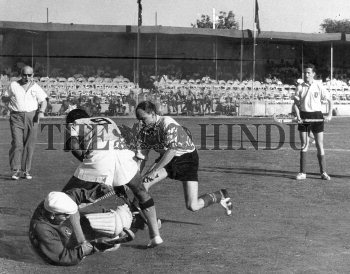 Caption : Despite the stubborn resistance by the Belgium goal-keeper Thill, who falls on the ground in the process, and Mercier, Darshan Singh of India (No. 9) succeeds in scoring a goal while the German umpire watches keenly during the International Hockey Tournament in Ahmedabad on January 19, 1962. India beat Belgium by 4-0. (Published in The Hindu on January 21, 1962) PHOTO: THE HINDU ARCHIVES