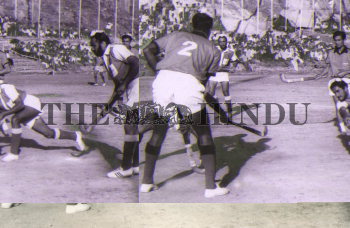 Caption : Punjab centre-forward Balbir Singh scoops the ball towards the Bhopal goal in the National Hockey Championship for the Rangaswamy Cup at the Habbibullah Stadium at Ootacamund on February 13, 1968. Punjab won by a solitary goal. (Published in The Hindu on February 15, 1968) PHOTO: THE HINDU ARCHIVES