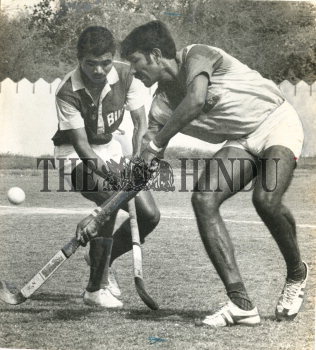 Caption : Bihar's Kalyan Barla (left) tries to intercept Andhra Pradesh's Christopher in the National Hockey Championship for the Rangaswamy Cup at Jullundur on March 04, 1981. Bihar registered a thumping 10-0 win. (Published in The Hindu on March 08, 1981) PHOTO: THE HINDU ARCHIVES