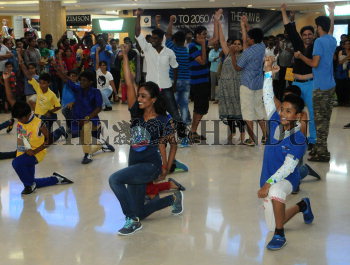 Caption : CHENNAI, TAMIL NADU, 26/04/2015: Together, we can: Visitors and shoppers at Express Avenue mall were in for a surprise when a group of volunteers burst into a flash mob on Sunday evening on April 26, 2015. Organised by ‘We Can’ along with Raack Dance Academy, the flash mob aimed at creating awareness on autism. April is marked as World Autism Awareness month. The mall's atrium was also lit up in blue. Photo: R. Ragu