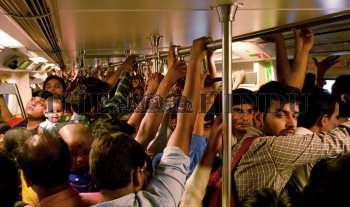 Caption : NEW DELHI, 26/04/2015: Delhi Metro commuters jotsle for space as the Metro service resume after a brief halt in New Delhi on April 26, 2015. Kolkata and Delhi Metro services stopped for a brief time after the reports of fresh termors. Photo: Prashant Nakwe