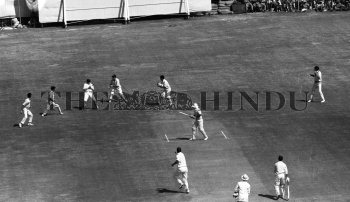 Caption : India's first wicket fell without a run on the board when H.B. Taber the Australian wicketkeeper, caught Indian batsman A.V. Mankad off L.C. Mayne, on the second day of the fifth and final cricket Test match at Chepauk in Madras on December 25, 1969. Mankad failed to avoid a bouncer and the ball streaked off his bat to K.R. Stackpole at second slip. Stackpole got his hands to the ball but could not hold it. It flew away from him to Taber, who diving across to his right met it half-way to take a spectacular catch. The picture shows the ball bouncing off Stackpole's hands and Taber in his initial movement to claim it. PHOTO: THE HINDU ARCHIVES