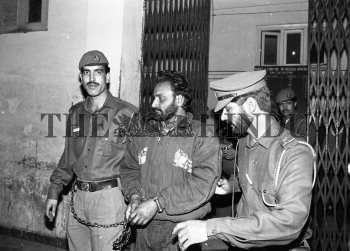 Caption : A suspected Punjab terrorist Kabul Singh, owing allegiance to Bindranwale Tigers Force of Khalistan (Chinha Group), who is believed to be involved in two shoot-outs in the Terai region, being produced at the Tis Hazari court, in New Delhi on January 24, 1994. PHOTO: THE HINDU ARCHIVES R