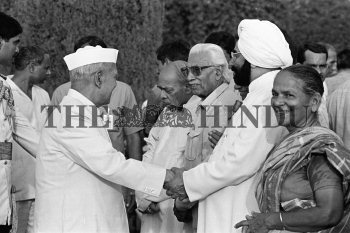 Caption : Freedom fighters were honoured and their sacrifices recalled at a function organised by the Indian Parliamentary Group in the Central Hall of Parliament to mark the conclusion of the 50th anniversary celebrations of the Quit India Movement, on August 09, 1993. Photo shows President Dr. S.D. Sharma greeting former President Mr. Zail Singh on the occasion. PHOTO: THE HINDU ARCHIVES