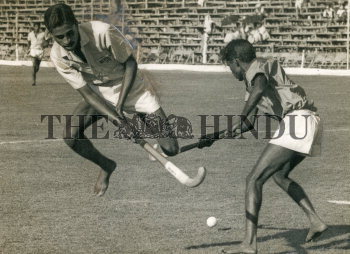 Caption : Madhya Bharat's Bhagat Singh's stick flashes and despite stout resistance by a Maharastra defender, the ball races towards the goal. It was an equaliser but Maharashtra went on to win the match by 4-1 in the National Hockey Championship held at Madurai. (Published in The Hindu on March 25, 1967) PHOTO: THE HINDU ARCHIVES