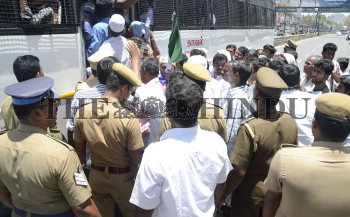 Caption : VELLORE, TAMIL NADU, 21/04/2015: Volunteers of the Thamizhaga Makkal Jananayaka Katchi being arrested in front of the Gandhi Statue in Vellore on April 21, 2015 when they attempted to take out a march to Andhra Pradesh demanding a CBI enquiry into the killing of 20 Tamil Nadu workers in the Seshachalam Forests near Tirupati on April 7. Photo: C. Venkatachalapathy