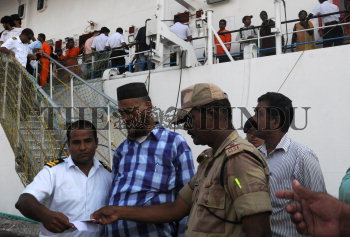 Caption : KOCHI, KERALA, 18/04/2015: Ramadhan Salah Hussein Mohammed (in cheque shirt) being readied to be taken to Government General Hospital in Kochi after he arrived on MV Kavaratti from YEMEN on April 18, 2015. Photo: H. Vibhu