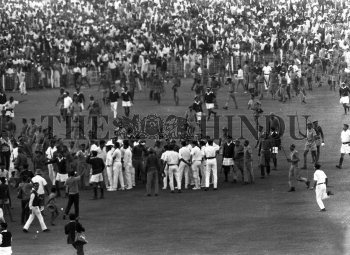 Caption : Australian players returning to pavilion with police ESCORT as crowd entered the ground after Australia's victory over India in the fourth cricket Test match at Eden Gardens in Calcutta on December 16, 1969. PHOTO: THE HINDU ARCHIVES