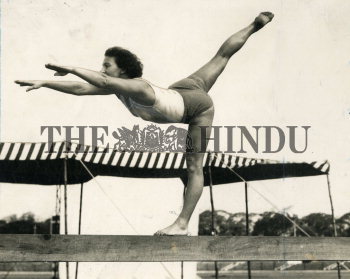 Caption : Russian gymnast Maria Grokhoskaya, the absolute champion in the Helsinki Olympics, seen showing her skill on the beam. This was part of the display given by the touring Russian gymnastics team at the Corporation Stadium in Madras on April 01, 1956. (Published in The Hindu on April 03, 1956) PHOTO: THE HINDU ARCHIVES