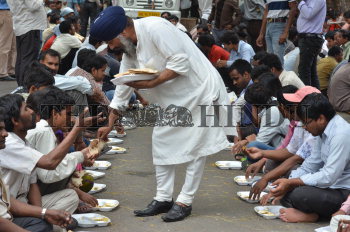 Caption : NEW DELHI, 16/04/2015: Visually-impaired protesters eat food donated by a community kitchen, during a dharna under the banner of National Federation of the Blind at Jantar Mantar in New Delhi on April 16, 2015. The protesters were demanding the implementation of a previously promised job quota for disabled people. Photo: Shiv Kumar Pushpakar