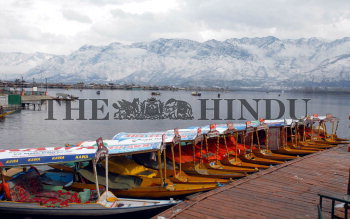 Caption : SRINAGAR, 10/01/2008: A Kashmiri fishes on the Dal Lake after fresh snowfall backdrop of a snow-covered mountain after a mild spell of overnight snowfall in Srinagar on January 10, 2008. Seven soldiers and eight army porters were feared killed after avalanches, triggered by heavy snow, hit army posts near the border with Pakistan in Kashmir, an army spokesman said on January 10, 2008. Photo: Nissar Ahmad