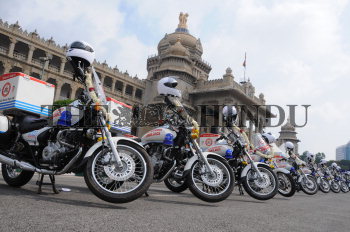 Caption : BENGALURU, KARNATAKA, 15/04/2015: The much-awaited two-wheeler-responder bike ambulances were inaugurated by the Chief Minister of Karnataka in front of the Vidhana Soudha in Bengaluru on April 15, 2015. The bike ambulance project is termed as 'platinum ten minutes' trauma care initiative. Out of the 30 bikes launched, 21 will be stationed at strategic locations in the city and districts like Mysuru, Mangaluru, Kalaburgi, Belagavi, Hubballi-Dharwad, Davangere, Tumkuru, Vijayapura and Shivamogga. The bike ambulance will carry 40 medical items including stethoscope, pulse oxymeter, bandages and IV normal saline apart from 53 basic drugs. The government has spent nearly Rs 2 lakh on each bike. Photo G R N SOMASHEKAR