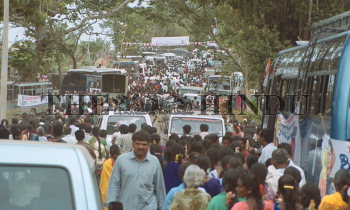 SONIA AT CONVENTION TO MARK 3 YEARS OF "STREE SHAK

Caption : Picture shows the heavy traffic jam at the convention to mark 3 years of "Stree Shakti", at Hebbur in Tumkur District of Karnataka on September 2, 2003. The Congress Government is utilising the opportunity to project its Stree Shakti Yojana launched three years ago by the Department of Women and Child Development. Women have formed self-help groups (SHGs) under the scheme, and mobilised savings. Two lakh members of SHGs are expected to attend the convention besides one lakh Congress workers. Congress President, Mrs. Sonia Gandhi will inaugurate the convention. Photo: K. Bhagya Prakash