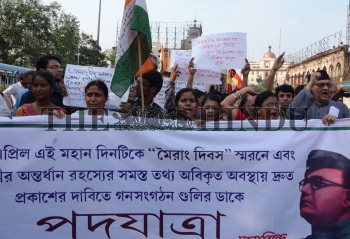 Caption : KOLKATA, WEST BENGAL, 14/04/2015: Family members of Netaji Subhas Chandra Bose led by his grand nephew Chandra Kumar Bose (right) bring out a rally in Kolkata on April 14, 2015 demanding declassification of files relating to Netaji. The rally comes a day after a family member of Netaji met Prime Minister Narendra Modi in Berlin demanding declassification of files. Family members and supporters of Netaji who held a rally from Central Avenue to Netaji Statue in Esplanade. The family members also raised question on the allegations of snooping on Netaji's family that has recently come to fore. Photo: Sushanta Patronobish