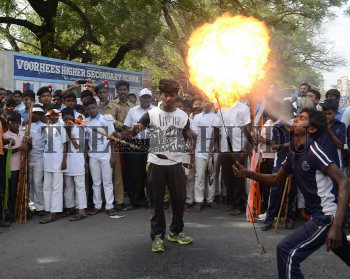 Caption : VELLORE, TAMIL NADU, 14/04/2015: A student of Voorhees Higher Secondary School, Vellore performing a fire feat in front of the school at the culmination of a march taken out in Anna Road in connection with the 150th anniversary celebrations of the school on April 14, 2015. Photo: C. Venkatachalapathy