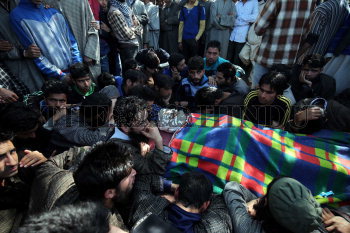 Caption : TRAL, JAMMU AND KASHMIR, 14/04/2015: Kashmiri villagers near the body of a civilian Muhammad Khalid Wani brother of Active Militant commander of Hizbul Mujahedeen a Kashmir based militant organization Burhan Wani during his funeral procession in Tral South of Srinagar on April 14, 2015. Wani was allegedly killed by Army yesterday evening during an encounter with the suspected militants in the forest area of South of Srinagar, Police said. Photo: Nissar Ahmad