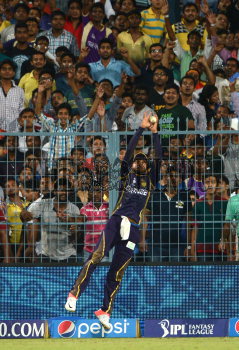 Caption : KOLKATA, WEST BENGAL, 11/04/2015: Manish Pandey of Kolkata Knight Riders catches the ball off a shot from Chris Gayle on the boundary line and later threw it back to the field to avoid a six during the Indian Premier League (IPL) Twenty20 cricket match against Royal Challengers Bangalore at Eden Gardens in Kolkata on April 11, 2015. Photo: K.R. Deepak