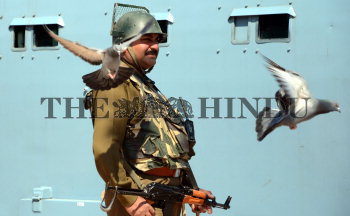 Caption : SRINAGAR, JAMMU AND KASHMIR, 11/04/2015: Pigeons fly as Security personnel stand guard infront of closed shops during strike in Srinagar, Separatists on April 11, 2015 are likely to spearhead calls for a complete shut down across the Kashmir Valley to voice their protest over a reported Central government move to create a separate township for Kashmiri Pandits. Photo: Nissar Ahmad