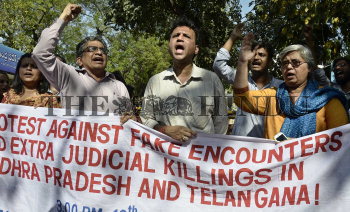 Caption : NEW DELHI, 10/04/2015: Members of the Delhi Solidarity Group shout slogans during a protest against FAKE encounters and extra judicial killings in Andhra Pradesh and Telangana, outside the Andhra Bhawan in New Delhi on April 10, 2015. Photo: Shiv Kumar Pushpakar