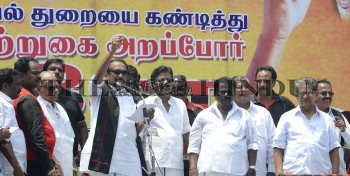 Caption : VELLORE, TAMIL NADU, 10/04/2015: MDMK general secretary Vaiko raising slogans condemning the AP Police at the junction of Fort Round Road and Anna Road in Vellore on April 10, 2015, before going in a procession to Chittoor for an agitation condemning the AP Police over the issue of firing on Tamil Nadu workers on April 7. He and other volunteers were later arrested by the Vellore Police. Photo: C. Venkatachalapathy