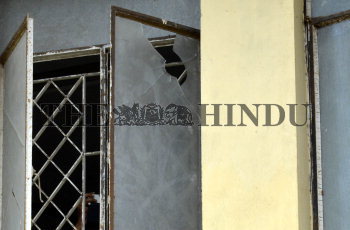 Caption : COIMBATORE, TAMIL NADU, 10/04/2015: A window pane broken during a protest by the members of Marumalarchi Naam Tamilar Iyakkam in front of the Andhra Bank in Coimbatore on April 10, 2015 condemning the gunning down of 20 people in an operation against the alleged red sanders smugglers in Andhra Pradesh on April 7. Photo: K. Ananthan