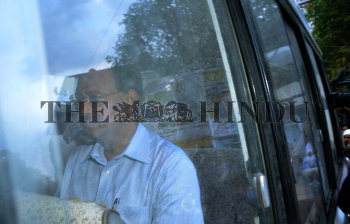 Caption : Former Chairman of Satyam Computers, B. Ramalinga Raju, along with nine other accused leaves the Nampally Criminal Courts in a police van after the final hearing, in Hyderabad on April 9, 2015. B. Ramalinga Raju and nine other accused in the Satyam Computers scandal have been awarded seven years rigorous imprisonment and imposed varying amounts of fine by a Special Court in Hyderabad on April 9. All the 10 accused in the multi-crore Satyam Computers account fraud, were found guilty by the judge B.V.L.N. Chakravarthy. Photo: Nagara Gopal