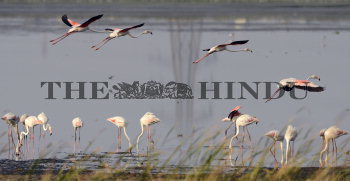 Caption : CHENNAI, TAMIL NADU, 07/04/2015: Nearly one hundred resident and migratory bird species have been recorded in the Pallikaranai wet land. The total number of species has outnumbered the migratory birds in Vedanthangal Birds Sanctuary, which is near Chennai. The Pallikaranai Marsh, the last of the wetlands in Chennai is now wearing an unpleasant atmosphere due to rotting trash at the garbage dumping yard, may go through a transformation over the next few years. The government chalked out a plan to turn this marsh land into a haven for many species birds, native plants and animals. The spillover from waste dumped into the Perungudi garbage yard north of the marsh polluted the wetland for three decades now. Burning of waste materials, is not so uncommon in the area, has chocked many birds. The encroachments all over the marshy land has reduced it from a 6,000-hectare wildlife hotspot in the 1960s to a mere 593 hectares (1,460 acres) in 2014. With NGO Care Earth, the government, has chalked out a plan to revive nearly thousand acres along the marshÕs southern boundary and convert it into an eco-tourism destination. The eco-park which is expected to be completed by 2016 will include a walkway and a viewing deck point. Photo: S.R. Raghunathan