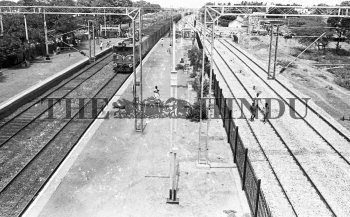 Caption : The broad gauge suburban service in Madras will take another step forward when Southern RAILWAY completes the quadrupling of tracks with electrification up to Pattabiram (West) by mid-September. It was only some months ago that the quadrupling works were completed and commissioned up to Avadi. (Circa September 01, 1987) PHOTO: THE HINDU ARCHIVES