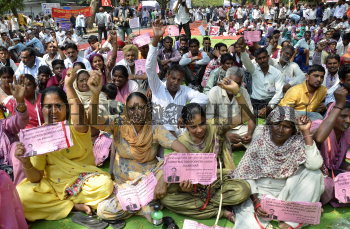 Caption : NEW DELHI, 06/04/2015: Construction workers from Jalandhar (Punjab) and various states participating in a procession under the banner of Centre of Indian Trade Unions (CITU), at Jantar Mantar in New Delhi on April 06, 2015, in demanding proper implementation of the all India Building and Construction Workers Act in all the states. Photo:Shiv Kumar Pushpakar