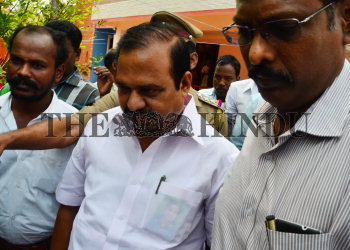 Caption : TIRUNELVELI, TAMIL NADU, 05/04/2015: Former Minister Agri S.S. Krishnamoorthy being taken to the residence of Judicial Magistrate in Palayamkottai on April 05, 2015 in connection with the suicide of engineer S. Muthukumarasamy and other graft charges. Photo: A. Shaikmohideen