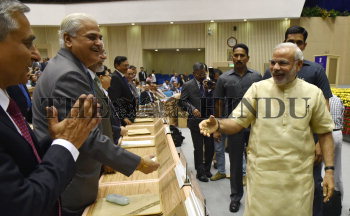 Caption : NEW DELHI, 05/04/2015: PM Narendra Modi with Supreme Court judges T.S. Thakur and Anil R. Dave at the inauguration of conference of Chief Ministers and Chief Justices of High Courts at Vigyan Bhavan in New Delhi on April 05, 2015, organised by Minstry of Law and Justice. The Conference is presided by Chief Justice of India H.L. Dattu. Photo: Prashant Nakwe