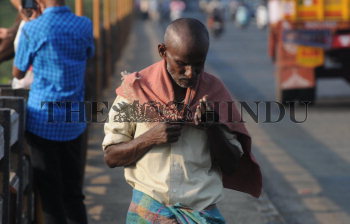 Caption : PALAKKAD, KERALA, 04/04/2015: A migrant labour walk through Cheruthuruthy bridge near Shoranur on April 04, 2015 after his daily job. Palakkad district accounts for 23 per cent of the domestic migrant labour population in Kerala, the highest in the State, and Idukki has the lowest of three per cent. They are constrained to live in unhygienic conditions without proper shelter, sanitation and safe drinking water, which has led to the spread of communicable diseases and other social problems. Kerala has now 2.5 million migrant labour population engaged for manual work in various sectors including construction. Interestingly, the size of the migrant workforce in the State almost matched the estimated size of Malayalis working abroad, especially in the Gulf. Not just that, the workers — mostly from West Bengal, Orissa, Assam and Uttar Pradesh — are pumping in about Rs. 17,500 crore to their home states a year, according to a study conducted by the Gulati Institute of Taxation. Photo: K. K. Mustafah