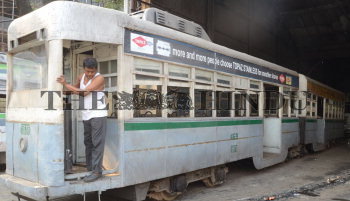 Caption : KOLKATA, WEST BENGAL, 03/04/2015: The Byomkesh Bakshi Tram Car which was used for shooting the film Detective Byomkesh Bakshy in December 2013. The car which was renovated which brandings of yesteryears on its top panel is kept at Parksircus Tram Depot of the Calcutta Tramways Corporation. Photo: Sushanta Patronobish