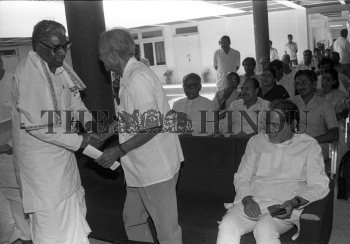 Caption : Mr. S.K. Dey, Union Minister for Community Development is being welcomed by the political leader at the training programme for the President s and Vice-presidents of the Zilla Parishad, which was inaugurated by the Chief Minister, Mr. Ramakrishna Hegde in Bangalore on April 20, 1987. PHOTO: THE HINDU ARCHIVES