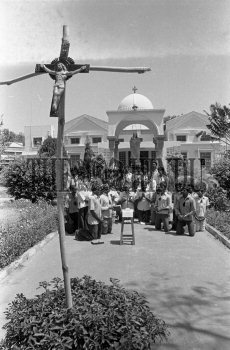 Caption : A silent prayer! The Karnataka Catholic Christara Kannada Sangha observing `Good Friday' as a day of protest against the "anti-Kannada stance" of the Archbishop at the statue of Virgin Mary in the house of Archbishop in Bangalore, the Capital of the southern Indian State of Karnataka. The protestors are covering their mouths with black cloth and arm bands too. PHOTO: THE HINDU ARCHIVES