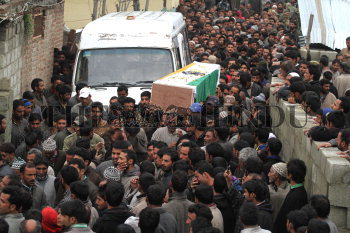 Caption : SRINAGAR, JAMMU AND KASHMIR, 02/04/2015: Kashmiri villagers carry the coffin of a Police jawan namely Mohammad Shafi during funeral procession at Pattan North kashmir 30 kms from Srinagar on April 02, 2015. After he was killed in an encounter with militants at Hardshoora village. Photo: Nissar Ahmad