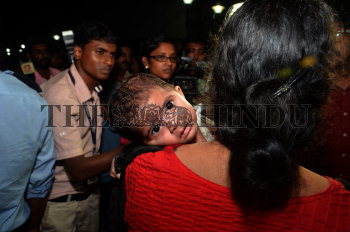 Caption : KOCHI, KERALA, 02/04/2015: Rose, a three months old kid with her mother Siji, who landed in Kochi by a special flight from Djibouti, coming out of the Cochin airport on Thursday morning. A group of 168 Indians, mostly Keralites, who were safely evacuated from war-torn YEMEN in a joint operation by the Ministry of External Affairs and the Indian Navy landed at the Cochin international Airport in the wee hours on April 02, 2015. Photo: Thulasi Kakkat