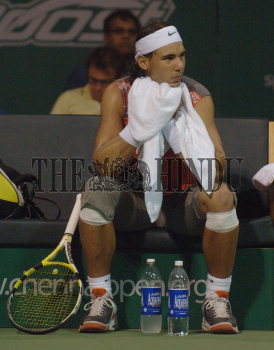 Caption : CHENNAI, 06/01/2008: Spain's Rafael Nadal looks on during a BREAK in the men's singles final against Mikhail Youzhny of Russia at the Chennai Open ATP tennis tournament in Chennai on January 06, 2008. Photo: R. Ragu