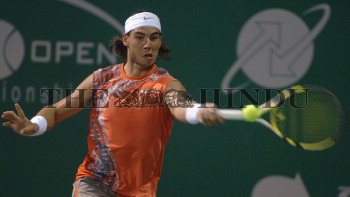 Caption : CHENNAI,05/01/2008: Rafael Nadal of Spain, who beats to Carlos Moya (not in pic.), in action during the second semifinals in the Chennai Open ATP tournament at the Nungambakkam Stadium in Chennai on January 05, 2008. Photo: R. Ragu