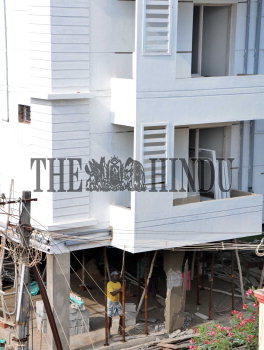 Caption : PUDUCHERRY, 01/04/2015: Iron poles erected to provide support to a four-storey building under construction after cracks appeared on one of the pillars, on Dhanraj Udayar Street at Lawspet in Puducherry on April 01, 2015. Photo: T. Singaravelou