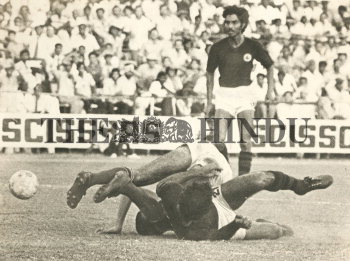 Caption : Orkay Mills' stopper Denzil and Mohun Bagan's striker Mihir Bose (21) dash against each other and tumble as Bagan's right Surjit Sengupta looks on in the quarterfinal league of the Federation Cup football tournament in Madras on April 26, 1981. PHOTO: THE HINDU ARCHIVES