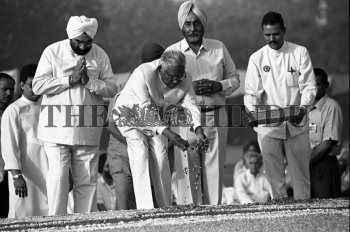 Caption : The Vice-President, Mr. K.R. Narayanan, paying homage at Zail Singh's samadhi, on the second death anniversary of the former President, in New Delhi on December 25, 1996. PHOTO: THE HINDU ARCHIVES